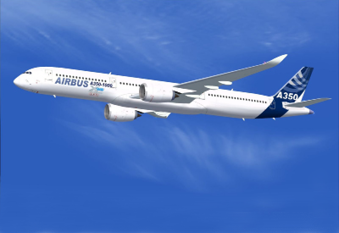 The A350 is Airbus’ first aircraft employing primarily carbon-fibre-reinforced polymer in its fuselage and wings. Initially conceived as a development of the A330 fuselage, the A350 was ultimately redesigned with a wider fuselage cross section in addition to a new wing, tail and cockpit, and this redesigned version was formally launched in 2006.